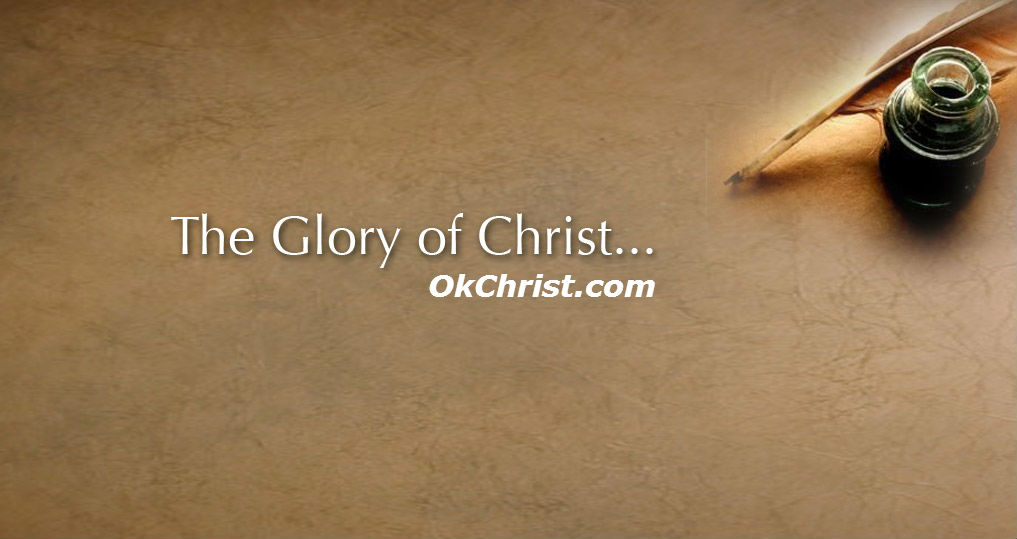 Scripture says: “…we beheld his glory, the glory as of the only begotten of the Father, full of grace and truth” (John 1:14). 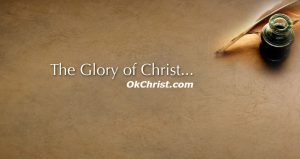 The word “Glory” is rather difficult to fathom, mostly because as humans, we do not really know what true Divine Glory is.  We do have a basic understanding of the word, but our comprehension remains rather subjective and quite limited.  Let’s look at this wonderful topic for a moment.

In essence, “Glory” is the highest form of honor that we can bestow on someone.  It is a clear distinction accorded by common consent.  Something conferring renown on someone.  In the case of God, it actually includes adoration, worship.  We speak of the sun as “a blaze of glory”.  In this context, “glory” also suggests the splendor and bliss of paradise… perfect happiness.

When it comes to the glory associated with Christ, there are many subjects to consider.  We will attempt to present some of them in a simple and in a chronological order.

We will not consider, in this portion, the Lord’s glory in a distant past (before He came to earth) but will simply share the following verse about Moses: “was not able to enter into the tent of the congregation, because the cloud abode thereon, and the GLORY of the Lord filled the tabernacle” (Exodus 40:35).

Let us look at his Glory beginning with his humanity.

When Jesus (Emmanuel) entered into the world, it is said that myriads of Angles appeared, praising God: “Suddenly a great company of the heavenly host appeared with the angel, praising God and saying,  Glory to God in the highest, and on earth peace to men on whom his favor rests.” Luke 2.

There is no question that regardless of the fact that God became a human being, there was “moral” glory in his Being.  All through his life on earth, His glory was certainly felt and sometimes seen as we see when Jesus started his work on earth: “This beginning of miracles did Jesus in Cana of Galilee, and manifested forth his glory, and his disciples believed on him” (John 2:11) and throughout his ministry down here (example: transfiguration – Matthew 17).  Another example was when he healed the sick: “When Jesus heard that, he said, this sickness is not unto death, but for the glory of God, that the Son of God might be glorified thereby” (John 11:4). A noteworthy gem here: Christ, does not look to receive glory to Himself; the Son’s revealed glory redounds always to the glory of the Father. Ultimately, the Glory of Christ was also there, at the Cross.  John 12:23: “Jesus replied, The hour has come for the Son of Man to be glorified”.

But do remember that in reality, Christ has been rejected by the world.  So his moral glory can only be perceived through the Holy Spirit dwelling in believers: “until the Son of Man be risen again from the dead” (Matthew 17: 9).

No doubt, his most acclaimed glorified moment came when Jesus rose from the dead (Luc 23).  Following his return to life, Jesus lived in a “glorified” body… appearing and disappearing, eating, walking, etc… Yet his body was glorified and thus He ascended (Luc 24) in the Father’s house as a Man full of Glory.

In Jesus Christ, in nature and acts, we see the full manifestation of the Godhead.  In faith, we see Him as God: “He who has seen me has seen the Father.”   Scriptures speaks of the Son this way: “in whom dwells all the fullness of deity in bodily form.”

Currently, scripture tells us that Christ is in Heaven, in the Father’s House, in a human glorified body, interceding on our behalf.  See it this way.  Presently, He is the “great high-priest” and one future day, he will be the great King of Kings.  John 5 encourages us to honor the Son even as we honor the Father.  And 1 Peter 3:22 says: He “is gone into heaven, and is on the right hand of God; angels and authorities and powers being made subject unto him”.

There was this young man named Stephen in Scripture (Book of Acts) that was being put to death because of his Christian Faith.  The dying disciple, right before his last breath declared: “Behold I see the heavens opened, and the Son of Man on the right hand of God.”

The Bible says that in the future, the Name of Jesus shall be universally supreme and whose dominion shall know no bounds.

Daniel chapter 7 reflects on the future manifested glory of the once rejected Son of Man — “And there was given Him dominion and glory, and a kingdom, that all people, nations and languages, should serve Him; His dominion is an everlasting dominion, which shall not pass away, and His kingdom that which shall not be destroyed.”

In Hebrews chapter 2 –  we are told that all things must be put under the dominion of the Lord Jesus.  He will reign Supreme: “but we see Jesus, who was made a little lower than the angels for the suffering of death; crowned with glory and honor…” Then, there is the Apostle John.  In his old days, John traveled to an Island called Patmos.  There he saw a most extraordinary vision of a future day of judgment.  Revelations tells us that John saw the Lord Jesus Christ standing among the golden candlesticks with white garments, eyes of flame of fire, a voice as of many waters, a countenance as of the sun in his strength, and with feet as though they burnt in a furnace. Solemn stuff.  John fell on the ground… hardly able to breath.  But the Lord tells John not to be afraid.  The Lord, in this scene, presents Himself as the One who had been dead and was alive again, having the keys of hell and of death.  2 Samuel 23: “When one rules over men in righteousness,  when he rules in the fear of God,  he is like the light of morning at sunrise on a cloudless morning, like the brightness after rain that brings the grass from the earth.”

In Revelation 19, we shall see how the Lord comes as King of kings, and Lord of lords, from heaven, and how the beast and the false prophet will be put down by Him.  In Chapter 20: 4-6:  “And I saw an angel come down from heaven, having the key of the bottomless pit and a great chain in his hand. And he laid hold on the dragon, that old serpent, which is the Devil, and Satan, and bound him a thousand years.” Then will come His reign of peace upon the earth. In the last book of the Bible, Revelations, in Chapters 21 and 22, you also see a future kingdom with a Glorified Christ with the New Jerusalem, the Bride and so much more. The curse will be removed from the earth. In that day God will change the very aspect of things upon the earth. What is very cool also about the Glory of Christ is that this Glory is shared with those who believe.  “Our” glory is not the topic of this subject but we are simply adding this fine element for your encouragement: “I have given them the glory that you gave me, that they may be one as we are one: I in them and you in me. May they be brought to complete unity to let the world know that you sent me and have loved them even as you have loved me.” (John 17: 22, 23). #philippepaquette
Tweet
Share1
Share
Pin
1 Shares