Home › Christians › I wonder. Are Christians to be blamed?
Tweet
Share
Share
Pin
Philippe Paquette Since my conversion, when I was in college at a tender age of 22 years old, simply by reading the New Testament, I can now see back on my Christian life and wonder. From the outset, let me establish the fact that I am not without reproach.  I most certainly cannot be the one that will cast the first stone.  I have failed, I am failing and I shall continue to fail.  This I know.  This nature of ours is in all of us.  Still I can daily enjoy with my new Life as being a “partaker” of the Divine LIFE. In Christ, through Faith, I was given the gift of being “cleansed” (clean before God).  I had nothing to do with that.  It is all the work of our Lord, taking on my everlasting doom on HIS own shoulders.  For “… he became sin” in my stead.  So I can continue to fight the good fight with the armor of God and with the Presence, Teachings and Leadership of our God the Holy Spirit. And we can live victorious lives if we remain close to our Lord, our Savior regardless of our human nature.  As King David did, if we do fall, then, let us get back up and fight the good fight. The real issue is more general. After over four decades of attempting to be a disciple of my Lord, I still suffer, daily, by seeing so many around me that simply cannot accept the salutary message of Christ.  Why is that? Well, much of it is because of us, Christians. People measure the “message” based on what they see from Christians. Allow me to share with you a very personal and “heavy” example. One that brings tears as I compose these lines. I have four children.  I know that 3 of them are true believers.  We have a wonderful fellowship on spiritual matters and they understand the importance of being Christ oriented and to have their own daily relationship with our Lord.  It has now become to them as natural as it is for my wife and me.  It is like breathing.  The Holy Spirit does this work and I thank God for it. Yet, I have one daughter who refuses to confess Christ as her Savior.  It would seem strange that one out of four would be so distinct on this very important subject, one that defines our eternal assurance.  But she has problems in accepting Christ as her Lord.  Yet, they all were raised by the same Christian Parents with the same love and values.  So what went wrong with her? You see, my family, for decades, have attended a strong Evangelical Assembly where the teachings were as biblical, consistent and as strong as you can get.  (I thank God for this).  But there was one family, one that we considered our deep lovely friends that were with our Church for decades.  We used to visit each other often.  We were urbanites, but they were farmers and their meals were always quite amazing.  (They were from Europe so you can imagine the exquisite meal) as was the fellowship.  Christ, Scripture and Prophecy were often the topic of discussion. Eventually, something changed in that church. The leadership was changed and the new one became “legal”.  The leadership found fault in everything and started restricting many things that I did not agree with.  It was as if Grace had been replaced by the Law. In essence, we felt that the “liberty” of the Spirit had left us. Thus, we also chose to leave. A few years after our departure, we learned that this Farmer friend (one of the Leaders) was accused, judged and imprisoned for years as a child molester.  The father (who I though was a good friend) had molested, sexually, all his daughters, for years on end, (many daughters), and they eventually also took in small children as a Foster family and molested boys and girls as young as 4 years old.  The father also influenced one of his sons to do the same. When we learned about this, we were devastated.  How could we be so naïve?  That is when our daughter shared with us that when she was 9 years old, at the farm, the son had attempted to molester her also. Her remembrance of “Christians” is just that.  Nice words but evil. She never knew how to share it with us because she was 9 years old (one does not grasp these things at that age) and secondly she was too confused to articulate her experience.  It was simply too strange.  She did not allow anything to happen but she did not truly realize what all “that” was at the time.  (Children are very innocent and pure so they don’t get it at that age.  They simply remain confused in silence) but marked. As she grew up, she heard of the paedophilia in certain churches, the unfaithfulness of Preachers and so much more. So, for her, Christ is all mingled up in what Christians are… and it lacks.  So why should she believe in a System that “lacks”. She equally fails in accepting that “Christians” accept communion from pedophiles or supports fake married Ministers of the gospel who meet prostitutes in Motels but yet reject true sincere Christians who are faithful to each other and live for Christ even if they are same gendered persons.  It is a contradiction, to her, as to who God is. And I understand her. So at this venture in my life, I do wonder!  Are Christians to be blamed.  I think so. We should really look, deep inside and ask ourselves some very penetrating questions.  Something is amiss. What should we do about this. #philippepaquette 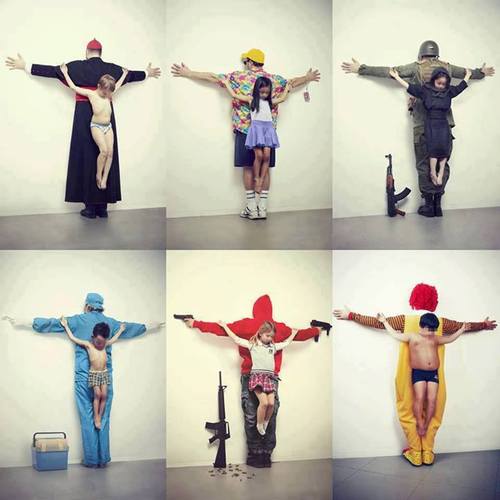 We Are Sacrificing Our Children

Your children WILL have Eternal life…

5 Comments on “I wonder. Are Christians to be blamed?”